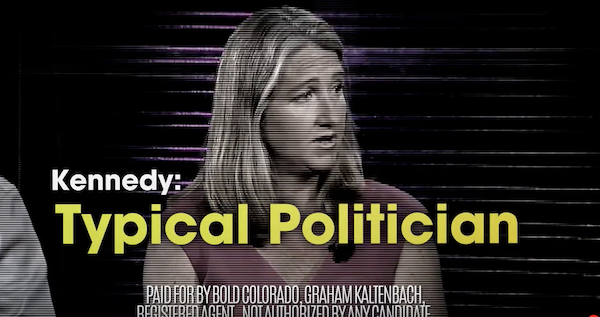 About the message: This initial ad from Bold Colorado takes on Democratic gubernatorial candidate Cary Kennedy for "breaking her pledge" to run a clean campaign. "Her allies are attacking her opponents and running a negative campaign," the ad says. "Not just negative, but dishonest," it goes on, citing TV truth tests.

The "negative" ad they cite is from Teachers for Kennedy, a super PAC funded by teacher unions and others. It contrasts past positions of Polis and former state Sen. Michael Johnston on education with Kennedy's opposition to school vouchers and support of teachers. And KDVR did conclude those claims are misleading.

Super PACS and candidates aren't supposed to coordinate campaign messages or activities. In a Truth Test, 9News concluded that Kennedy could publicly ask Teachers for Kennedy to stop the negative advertising.

About the messenger: Bold Colorado is an independent spending committee supporting Congressman Jared Polis in the four-way Democratic primary for governor. It was formed by Rick Palacio, the former state Democratic Party chairman.

The messenger's money: Gay & Lesbian Victory Fund, a federal nonprofit, gave $275,000 to Bold Colorado. Other funding comes from investors in the East and West coasts.