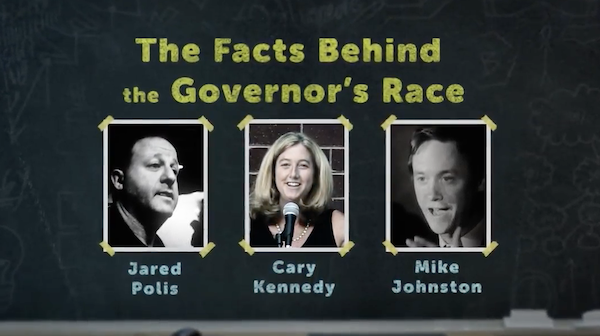 The ad says Polis supported a voucher program to take money from public schools. According to documentation supplied by Teachers for Kennedy, Polis said he didn't support the final version of a 2003 voucher bill that was struck down by the state Supreme Court.

The ad accuses of Johnston of pushing "conservative anti-teacher laws that experts say hurt students." He sponsored a 2010 bill that tied teacher evaluation to student performance. On Wednesday, Johnston's campaign accused Kennedy of violating the Clean Campaign Pledge signed by the four Democratic candidates because of the ad. But candidates are prevented by law from coordinating with independent spending committees such as Teachers for Kennedy.

KDVR's Truth Check concludes the ad is misleading in its claims about Polis and Johnston.

The ad then notes that's why teachers endorsed Kennedy, saying she "offered the law that helped protect education funding" and "helped restore over 380 schools." A KDVR analysis of one of Kennedy's TV ads noted that the she wasn't the only one behind the measure to rebuild schools, which required legislative approval.

Delve further into the Democratic debate on education reform with this Chalkbeat news article.