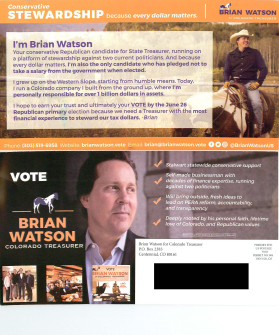 About the message: This mailer from GOP treasurer candidate Brian Watson emphasizes his conservative credentials in the three-way June 26 primary. It notes that he won't take a government salary if elected.

About the messenger: Brian Watson is a real estate developer from Centennial. He defeated two other Republicans in the June 26 primary for state treasurer in his first run for office.

The messenger's money: Watson has spent $574,000 of his own money in the contest.