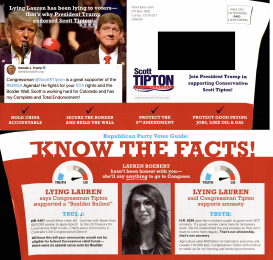 This missive from incumbent GOP Rep. Scott Tipton brands his 3rd Congressional District primary opponent Lauren Boebert as "Lyin' Lauren" correcting allegations she made against him in her mailers. He also shares a tweet from President Donald Trump endorsing him.

U.S. Rep. Scott Tipton defeated Democratic incumbent Rep. John Salazar for the 3rd Congressional District seat in 2010 and has served since then. He also served in the state House.

According to Open Secrets, banking and financial interests are contributing heavily to Tipton.