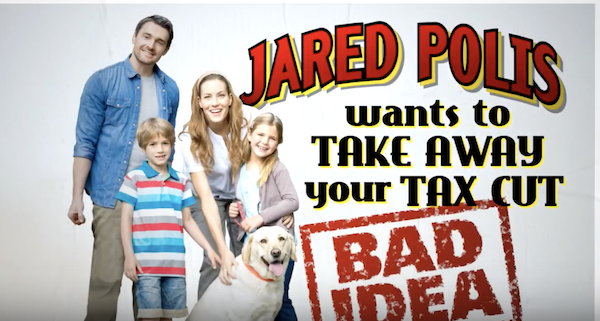 This new ad from State Solutions, an arm of the Republican Governors Association, criticizes Democratic U.S. Rep. Jared Polis for wanting to "take away your tax cut" and suggests calling Polis to complain.

It is true that Polis introduced a bill to repeal the tax cuts approved by Congress in late 2017. He even got into a Twitter spat with President Donald Trump over his bill.

Polis is running for governor against Republican Treasurer Walker Stapleton. A 9News Truth Test notes that the ad content is mostly true, though lacking in context. And it notes that if elected governor, Polis will not have a say in federal tax policy.

Here's the script of the ad:

"Say you’re a regular family of four. Making a combined salary of $75,000 a year.
"Thanks to recent tax cuts, you’ll save $1,800 a year. That could be four months of car payments, two months of daycare, or a family vacation to the Grand Canyon.
"But Congressman Jared Polis wants to take away your tax cut. That’s a bad idea we can’t afford.
"Tell Jared Polis hands off my tax cut."

State Solutions Inc. is a nonprofit affiliated with the Republican Governors Association.

Because it's a nonprofit and only files annual returns with the IRS, it's difficult to know where State Solution's money comes from. In 2014, the group gave $750,000 to Citizens for a Sound Government, a Lakewood-based nonprofit, whose registered agent is Alan Philp,a former staffer for GOP Gov. Bill Owens and other Republican groups. That group, in turn, allocated $732,500 to nonprofits in other states.