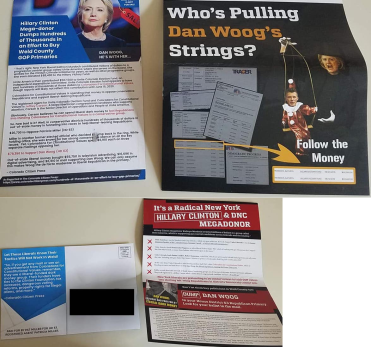 This mailer from House District 63 Republican candidate Pat Miller takes aim at former Erie Trustee Dan Woog, trying to associate him with 2016 Democratic presidential candidate Hillary Clinton. Miller is taking a circuitous route, citing outside spending supporting Woog and opposing Miller by Coloradans for Constitutional Values. Much of that group's money can be traced back to Kathryn Murdoch, who supported Clinton in 2016 and has donated to a variety of Democratic causes.

Woog can't control what outside groups support or oppose him or Miller, because coordination between candidates and super PACs is prohibited. So Miller's allegations apply to the group supporting Woog, but not to the candidate himself.