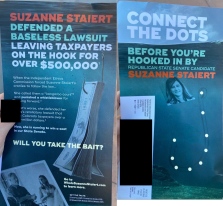 This mailer from a Democratic super PAC says Republican state Senate candidate Suzanne Staiert defended a "baseless lawsuit" that cost taxpayers $500,000. Staiert was deputy for Secretary of State Gessler when he was found in violation of state ethics laws for inappropriate spending. Gessler unsuccessfully appealed the case, which cost taxpayers at least $500,000 although his office disposed of some records of the costs.