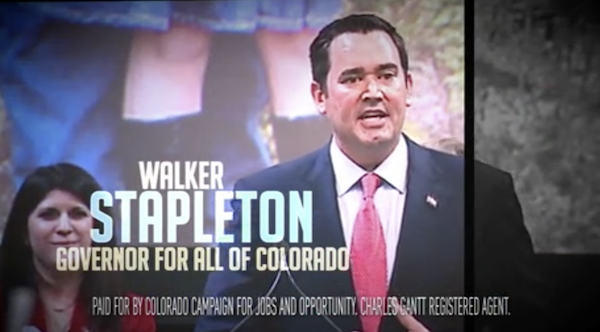 This ad from the super PAC Colorado Campaign for Jobs and Opportunity says Coloradans "can't afford all the new spending" Democratic gubernatorial candidate Jared Polisis promising. It then pivots to say that Republican candidate Walker Stapleton will raise teacher pay and improve roads without raising taxes.

It should be noted that in Colorado, the governor has virtually no role when it comes to raising taxes. All tax hikes must be approved by voters, and the state is required to return revenues over a certain amount to taxpayers. For this reason, Colorado's budget is typically strapped, with little new money to pay for programs. It's unclear what programs Stapleton would cut to pay for teacher raises and roads.

We'll update with TV fact checks when they become available.

Colorado Campaign for Jobs and Opportunity is an independent spending committee to "support and oppose Republican candidates for governor." In 2014, the group aired ads opposing former Congressman Tom Tancredo's primary bid (he lost). This year, the group is supporting Walker Stapleton.

In the past, the group's activity was funded by a federal super PAC, Campaign for Jobs and Opportunity. In 2014, the Republican Attorneys General Association gave the group $155,000, investor Paul Singer gave $50,000 and Marlene Ricketts, Linda McMahon (now head of the Small Business Administration) and Ken Griffen each gave $25,000.