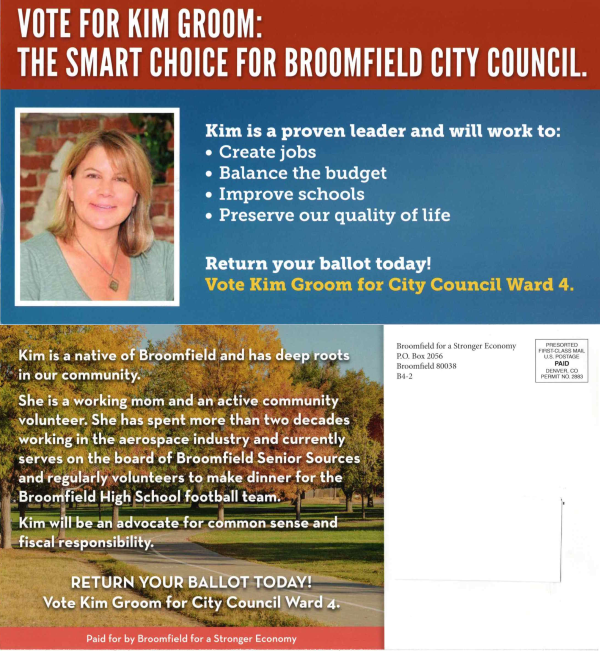 Messenger: Broomfield for a Stronger Economy

This is the second mailer supporting Ward 4 Broomfield City Council candidate Kimberly Groom. It emphasizes that she will create jobs and balance the budget, as well as improve schools (though the City Council doesn't have control over schools) and quality of life.

About the messenger: Broomfield for a Stronger Economy is an independent spending committee formed to "elect pro-business candidates regardless of affiliation" in the Broomfield city council elections. The group resembles Greeley for a Strong Economy, sharing the same registered agent and funding from Vital for Colorado, a pro-fracking business nonprofit.

The messenger's money: On Nov. 3, Broomfield for a Stronger Economy reported receiving $25,000 from the Colorado Economic Leadership Fund and $10,000 from Vital for Colorado. The group has reported spending nearly $22,000 thus far for for mailers, calls and website design to support Ward 1 incumbent Liz Law-Evans, Ward 3 candidate Rick Fernandez, Ward 4 candidate Kim Groom and Ward 5 candidate Karl Hofegger. Those candidates are also endorsed by the