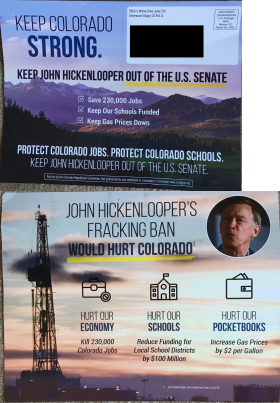 This mailer from the Colorado Republican Committee claims that Democratic Senate candidate and former Gov. John Hickenlooper supports a ban on fracking that would damage Colorado's economy.

In reality, Hickenlooper opposes a ban on fracking, though he isn't as vocal a proponent of the oil and gas extraction method as he was when he drank fracking fluid at a public hearing. In a June debate, he said he wanted to make the practice obsolete with a goal of using 100% renewable energy by 2050. But he says he opposes an outright ban.