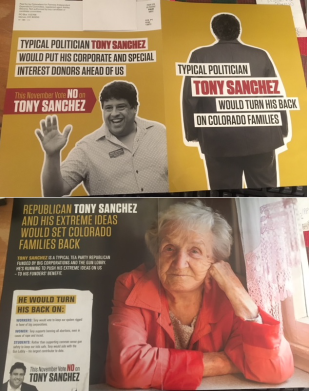 This mailer from super PAC Coloradans for Fairness attacks Republican Tony Sanchez as a "Tea Party Republican funded by big corporations and the gun lobby." He and Democratic state Sen. Brittany Pettersen are vying for an open seat in the state Senate. It is Sanchez's second run for a Senate seat.

Sanchez is supported by Rocky Mountain Gun Owners, considered more conservative than the National Rifle Association on gun issues. RMGO has donated $4,800 to his campaign.