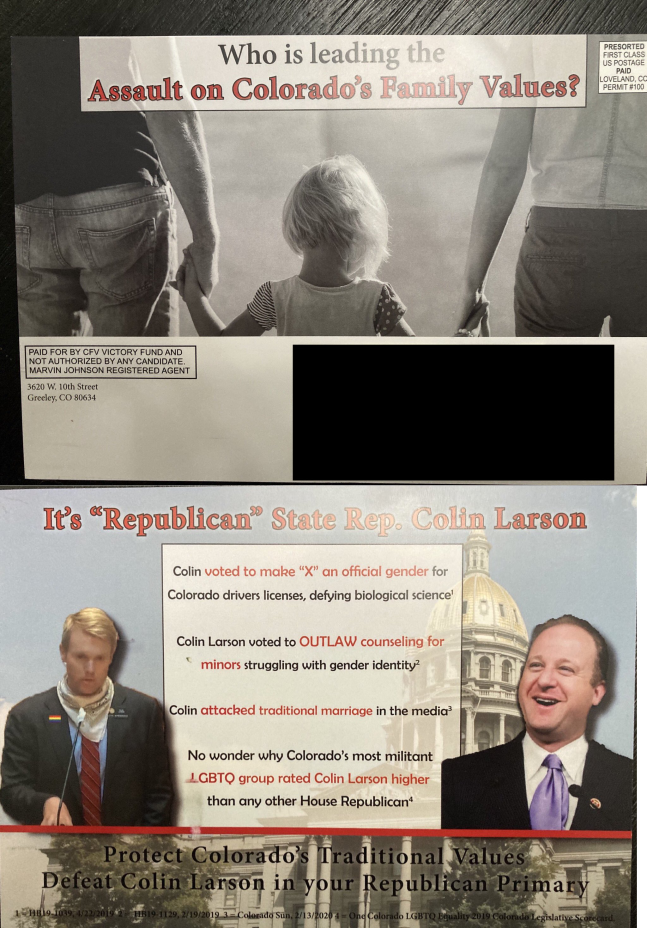 This mailer from newly created CFV, which appears to stand for Colorado Family Values, attacks incumbent GOP Rep. Colin Larson as "leading the assault on family values." It says Larson ranked higher than any other House Republican by Colorado's "most militant LGBTQ group" when in fact Rep. Hugh McKean also voted for two of the five bills scored by the group in 2019, the only session in which Larson served and was scored. And four GOP state senators ranked at Larson's level or above in 2020.

The description of the bills in question are misleading. Larson voted to ban forced conversion therapy for gay teens and to allow changes in identity documents for trans people.

CFV is a super PAC created June 18 to "FIGHT FOR ORTHODOX CHRISTIAN TRUTH/FAMILY VALUES CONCERNING ALL FACETS OF HUMAN SEXUALITY, MARRIAGE, FAMILY LIFE" according to its initial filing. Term-limited Republican Rep. Stephen Humphrey is the organization's filing agent. It is affiliated with the nonprofit Colorado for Family Values.

The group was primarily funded by nonprofit Colorado Family Values.