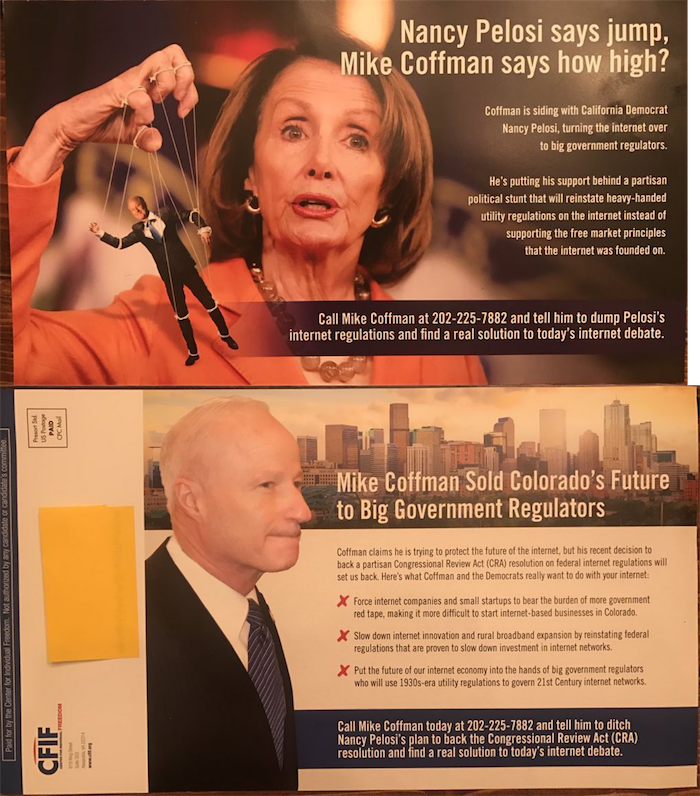 In one of the odder messages we've seen, this mailer links GOP Rep. Mike Coffman to Democratic House Leader Nancy Pelosi and criticizes him for supporting net netrality or the open internet. Coffman is one of several Colorado congresspeople opposing an FCC effort to allow internet companies to charge extra for consumers to reach certain content or block that content altogether.

The Center for Individual Freedom, a conservative nonprofit, sent the mailer, which doesn't mention Coffman's upcoming general eleciton contest with Democrat Jason Crow. Instead, it suggests recepients call Coffman to complain about his position on the issue.

It isn't clear what CFIF expects to accomplish with this mailer, since Coffman has been a Republican leader in supporting net neutrality. Crow's campaign also supports net neutrality. And more than 80 percent of voters support an open internet.

CFIF also has lobbied Coffman opposing his support of dreamers, students who grew up in the U.S. but lack immigration documents.

About the messenger: The Center for Individual Freedom is a nonprofit organization that says its aim is to "protect and defend individual freedoms and individual rights guaranteed by the U.S. Constitution." Among other things, the group opposes the Affordable Care Act, labor unions and so-called "net neutrality," which would prevent corporations from limiting or charging more for certain kinds of internet use.

The messenger's money: Because the group is a nonprofit, it's virtually impossible to know who is funding the group. A 2012 Mother Jones article noted past funding from a Karl Rove-backed group and the National Smokers Alliance.