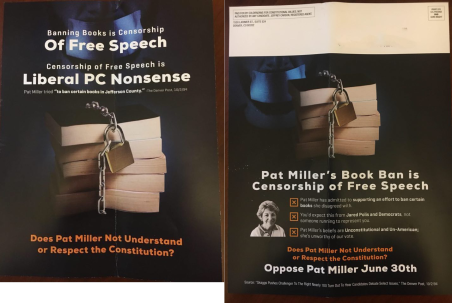 This mailer from super PAC Coloradans for Constitutional Values accuses Republican House District 63 candidate Pat Miller of wanting to ban books. The allegation is from 1994, when Miller ran against incumbent Democratic Congressman David Skaggs. The mailer calls this "liberal PC nonsense" and says such censorship is something to be expected from Gov. Jared Polis and Democrats.

Coloradans for Constitutional Values is a recently formed super PAC (techinically independent expenditure committee) that may take unlimted contributions and spend unlimited amounts as long as it doesn't coordinate with candidates or political parties. It is supporting several candidates in the June 30 primary contests.

It appears the group's money comes from United Colorado Election Fund, which gets its money from Unite America, a federal super PAC that gets it money from donors including Kathryn Murdoch, wife of one of media mogul Rupert Murdoch's sons, and others.